Albena Vrachanska: The most important thing is to keep our love for music and art 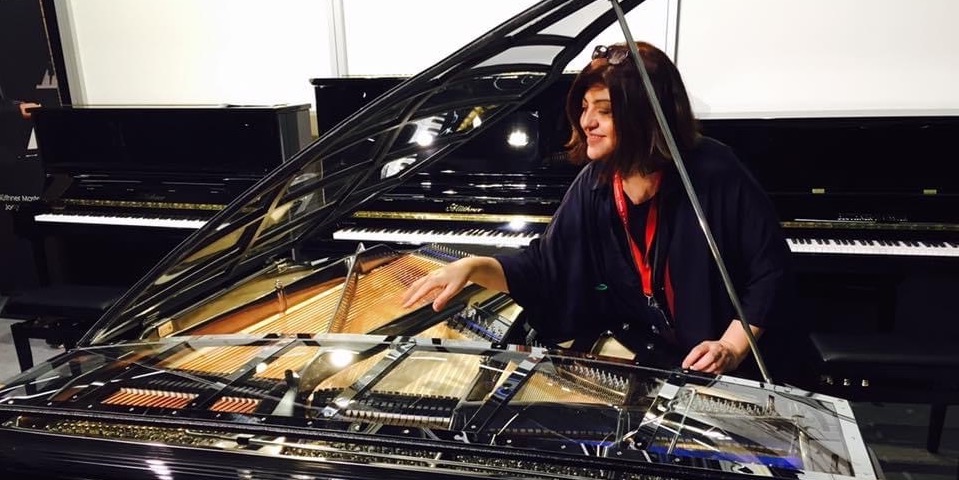 Albena Vratchanska is granddaughter of the distinctive Bulgarian composer Andrei Vratchanski. Albena graduated in piano at the National School of Arts “Panayot Pipkov” in Pleven and continued her studies with composition at the National Music Academy “Prof. Pancho Vladigerov”. In 1996 she moved to Luxembourg to study contemporary composition techniques, music analysis and computer music with Claude Lenners.

Albena Vratchanska has published four albums with her own music: CRYSTAL DREAM (2016) for solo piano, performed by Romain Nosbaum, THЕ VOYAGER (2019) with Veronique Nosbaum - soprano and Romain Nosbaum - piano, BRIDGES OF LOVE (2020) with the pianist Plamena Mangova and DREAMLOVER (2021), which presents most of her pieces for saxophone. She is also the founder, and since 2009, the president of the International Composers Competition “Artistes en Herbe”, organized under the auspices of the Ministry of Culture of the Grand Duchy of Luxembourg, and also the art director of New Classic Stage and Les Concerts du Foyer Européen festivals in Luxembourg. Albena is also a member of the Managing Board of FLAC (La Fédération Luxembourgeoise des Auteurs et Compositeurs) and the Union of Bulgarian Composers.

Albena Vrachanska is recipient of the Order of Merit of the Grand Duchy of Luxembourg (l’Ordre de Mérite du Grand-Duché de Luxembourg). She has been awarded the Silver Medal of L'UNION SAINT PIE X and the Silver Medal of L'UNION GRAND-DUC ADOLPHE.  She is our new guest at Brass Stories Project. We are talking about the musical impressions in her work, her love and commitment to this form of art and the place of wind  instruments in it...

Can you tell us a bit more about the music in your life and your life in the music?
It is difficult for me to imagine my life without music - for as long as I can remember, I have been surrounded only by musicians and music. I have a lot of music in me, which is trying to get out and to reach more people and this is why I chose this profession - to create music.

Which are the musical instruments that you feel to vibrate at the frequency of your soul?
Apart from the piano, my most favourite music instruments are the wind ones – both brass and woodwind. This is why it is most natural that they are my choice for new music pieces. My father plays the trombone and conducts a wind orchestra and during my first concert with a band I played “Polka” by Lyudmila Lyadova for piano and wind instruments.

When did you feel free to compose your own music?
When I was 14, I took part in the first International “Flag of Peace” Assembly (1979), but before I got there, I had already had quite a few other compositions, dating back from the time I started playing the piano at the age of 10. Ever since I discovered this creative process - for me composing had always been writing notes on paper, not improvising on the piano.

Who are the people who inspired you to start composing? How did they help you express it?
My grandfather was writing music, I knew the word composer before being able to pronounce it properly. My father also wrote music and made the arrangements for many of his colleagues. When I started composing as a conscious creative effort at the age of 14, I started consulting professor Plamen Dzhourov. I do not say I had lessons with him, because this profession is not acquired in the standard way. And I can say that my teacher is, first, Plamen Dzhourov and later, Claude Lenners in Luxembourg.

How did it happen that life and music took you to the lowlands of Luxembourg and Belgium?
Luxembourg is the country that accepted me and provided me with the option to survive the strange times of political and economic crisis in Bulgaria in the 1990s. I belong to the Berlin wall generation, the professional musical diaspora of Bulgaria was created between 1990 and 2000. Life in Luxembourg is not easy for musicians but their cultural policy made it possible for me to develop.

Let us talk about the brass instruments in your music world. To what extent is your connection to them predetermined in your wind orchestra inspired family?
My father played trombone before becoming a conductor. My grandfather is a very unique composer, focused on music for wind orchestra. My own pieces for winds are many and one may say, prevailing – Concerto for tuba and orchestra, Concerto for baritone saxophone and string orchestra, a lot of chamber music for brass quartet, quintet and duet.

Recently, in Sofia, was the premiere of your piece for trombone and piano Sempre e Sempre, performed by prof. Atanas Karafezliew and Anelia Gospodinova. Can you tell us more about this piece?
This is a piece I wrote back in 2007. It has been performed numerous times in Luxembourg and Poland, but never in Bulgaria. That’s why I am very thankful to that wonderful duo for their performance during the New Bulgarian Music 2021 Festival and for the recording of the piece for the archive of the Bulgarian National Radio. It features many elements from the Bulgarian folklore, and even though the title is not in Bulgarian, it hints at the listener that “again and again” this motif is coming back. In 2007, I was not yet using the minimalist approach but due to the context, these techniques appear in the play on several different levels.

How do the brass instruments enrich the phrase of the musical story in your plays? For example, the choice of brass quintet for Mathieu Lamberty’s “Holy night” – a different and very beautiful sound. Extravagant creativity and what else was the basis of your decision?
This play was ordered by Patricia Adkins Chiti, an iconic figure in the feminist process for equality for female artists in the field of music. The Canadian brass quintet Borrelia Brass presented the play in 2012 during 6-7 concerts in Italy, including one in the Vatican. It is very classical and even tonal, with light, transparent factora and has been included in the pedagogical repertoire of Luxembourg Music Publishers.

You judge pieces for flute, saxophone and other winds, you write books for children – what would you like children to develop in terms of culture and sensitivity when reading them?
In the Western countries wind instruments are very popular, and so are wind orchestras, mostly non-professional, so children start playing them from an early age. In Bulgaria they join more symphonic orchestras and are rarely soloists. It might be good to develop according to this model – more solo and chamber concerts with wind instruments.

You are the founder and president of the International Composers Competition "Artistes en Herbe" in Luxembourg, which has an unique set of requirements for Europe, allowing children below the age of ten to participate as composers. What is your impression of these young composers?
Definitely this completion is among the most important missions for me in order to provide at least some viability for this profession and to make it interesting to talented children from a very early age. So far, all the members of the jury panel have been very dedicated to this cause, and every year we have Bulgarians who are distinguished with inspiration and call for teaching.

Tell us about your sheets of music for children – arrangements of 10 popular traditional Christmas songs or about the musical "Le Lapin Amoreaux" (The Bunny in love) and the volumes of plays from it for piano and violoncello Bunny Jazz?
Music for children is almost an exception in my portfolio. I very rarely undertake this responsibility as it is very difficult to compose. It should be easy for children to play and listen but not superficial or “cheap”, or as we say “generic”. On top of that, it results from a special occasion, which is rare for me. I teach all the time, but I refrain from using my own works, I feel as if I am imposing them.

What is it for you to be a composer in our strange modern times especially in the last two years, marked by musicians being isolated from close contacts with colleagues and audiences?
We are left with no choice, we need to move forward and to have courage, just like a car in a tunnel – it cannot go backwards, and we cannot go back to our previous cultural and musical life. The new means of digital communications become more and more widespread and if we fail to adapt, we will lose all we have achieved so far.

What would you like to see in the New Year, 2022, for music and for all your colleagues who create it? How far ahead in time, do you plan and dream?
In terms of human relations, I would wish for more good will and collegiality, more inspiration and success. I always plan for way ahead in time; I think about so many projects that I could not possibly implement over the next five years.

Do you have a favourite thought, quotation or saying that gives you strength in difficult times?
Because almost all times have been difficult in the past few years, for me it has become harder to believe, but they say that after rain comes sunshine… The most important thing is to keep our love for music and art and to stop this process of populism and consumer stereotypes, which dominate globally in a more and more threatening way in our modern society.

The interview is available in Bulgarian and in Dutch
Translation in Dutch: Ruben Vermeulen

Angel Kotev: Beauty in music as a professional credo