Victor Ewald: The architect - cellist, in love with brass instruments 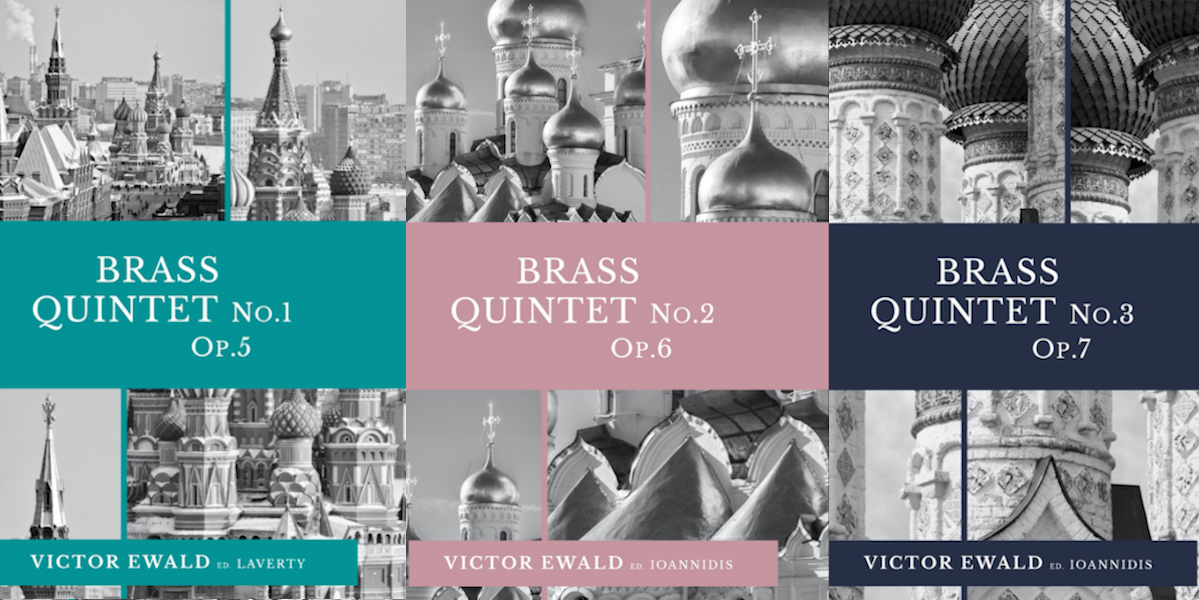 Victor Ewald's brass quintets have a special place in Russian chamber music. Moreover, for many years they are considered to be the first in the world history of music to be written for the modern composition of a brass quintet, including two trumpets, a horn, a trombone and a tuba. Beautiful and technical, Ewald's quintets both set serious requirements for performers and reveal the full brilliance of brass instruments. And it seems to symbolically unite the two sides in life, the scientific and creative path of the composer. A very curious story that is worth telling…

An architect and civil engineer, a scientist with outstanding contributions to the development of Russian engineering, Viktor Vladimirovich Ewald (1860-1935) was a German aristocrat from a family that moved to Russia in the early 19th century. His father, Vladimir F. Ewald, was a longtime director of the First Real School in St. Petersburg and supervisor of pedagogical courses at the city's Academy of Arts, a general history teacher of Grand Dukes Alexander Alexandrovich (future Emperor Alexander III) and his brother Vladimir Alexandrovich.

Viktor Vladimirovich followed his father's footsteps, graduating from the same First Real School and the Institute of Civil Engineering - the Higher Technical School of the Russian Empire. After graduation V. Vl. Ewald began his career as a civil engineer in the Ministry of War, while also teaching at IGI in Building Materials and Building Art, in fact his favorite specialties, which he taught for the rest of his life. He has a deep interest in chemistry - on his initiative the laboratory of the Institute of Engineering is (as we would say today) world-class, one of the first teachers is in the Department of Heating and Ventilation established in 1897, and in 1900 created the first mechanical in Russia laboratory for evaluation of construction materials. Meanwhile, from 1891, Ewald held the prestigious position of chief architect of St. Petersburg University. For some time he was editor of the almost mythical magazine "Architect", published by the Imperial Society of Architects of St. Petersburg between 1872 and 1924. The remarkably modern magazine includes articles on architecture, construction arts and technical education, construction legislation and urban planning history of architecture and numerous programs for international architectural competitions, exhibitions, etc. Among the editors of the magazine are remarkable scholars and aristocrats such as Count Nikolai Ivanovich de Rochefort and Leonty Nikolaevich Benoit - the last representative of the dynasty of artists and architects…

But back to the music. Beyond this brilliant career as an architect, engineer, scientist, researcher and teacher, Viktor Vladimirovich Ewald is an extremely interesting artistic figure who left lasting traces in Russian musical culture from the second half of the 19th and the beginning of the 20th century as a cellist and composer. He began his musical education in 1872 at the age of 12. His father noticed his talent and enrolled him at the St. Petersburg Conservatory. The school was founded only 11 years earlier by Anton Rubinstein and is the first of its kind in Russia. At the Conservatory, young Ewald took lessons in cornet, horn, piano, cello, harmony and composition. His teacher Karl Davydov (whom Tchaikovsky later described as the "king of cellists") encouraged him to use every opportunity to play by maximizing his repertoire and venues. Thus, Ewald soon became (and remained for the rest of his life) one of the most active and impressive members of a remarkable circle of musicians whose basic professions and education were quite different. This group shares common interests in Russian folk song and has made a significant contribution to the creation of a distinctive Russian national musical style. And the leading personalities in it are the well-known as the Mighty Five: the wonderful composers Mily Balakirev, who is preparing for a career as a chemist, but Glinka convinces him to focus on music, Modest Mussorgsky - infantry officer, Nikolai Rimsky-Korsakov - naval officer, Caesar Cui - military engineer and Alexander Borodin - chemist and professor at the Medical and Surgical Academy.

Together with Ewald, these remarkable musicians are part of the Belyayev Circle and those Friday concert evenings at the home of the famous patron Mitrofan Petrovich Belyayev, which were held without interruption from 1888 until his death in 1904. Every week at these events new works written especially for Belyayev. He plays excellently on the viola in a string quartet, whose cellist is Viktor Vladimirovich. It is for this composition that Ewald writes (actually reworking his first brass quintet) String Quartet Op. 1, as well as Variations on a Theme from a Russian Folk Song co-authored with A. Glazunov and N. Sokolov. And it is almost certain that at least one of Ewald's magnificent brass quintets had its premiere there as well - on one of Friday's music evenings at Belyayev's home. The significance of M. Belyayev for the Russian musical culture in the last quarter of the 19th century is exceptional. His love of music and generosity gave a strong impetus to the development of the professional Russian school of composition and performance in a way different from the heavy German influence that characterized most of 19th-century Russia in both teaching and interpretation.

Victor Ewald's brass quintets were written between 1888 and 1912. For many years it was considered that his works were the first in which the modern composition of the brass quintet existed. However, the French took away this "palm of the championship" with the discovery that the composer and violinist Jean-François Bellon - a very interesting figure from the Parisian intellectual elite of the mid-19th century - wrote 12 four-part brass quintets between 1848 and 1850, in which introduces the modern composition of tools. These pleasant and elegant quintets in sonority and harmony cannot be compared to the popularity and importance of Victor Ewald's quintets. The creation of the chamber works for brass by both composers is a result of the significant improvement and development of this group of instruments in the 19th century, as well as the expanded opportunities they provide performers in terms of homogeneity of their sound in the ensemble and and as virtuosity.

It is important to note that in fact in the compositions of the brass quintets of both Belon and Ewald there are significant differences in the instruments used. There is information about preserved photos from around 1912 (unfortunately they are not available on the Internet), in which a brass quintet was taken with the participation of Ewald himself. The composition is interesting: it can be seen that the high instruments are cornets with pistons, althorn with rotary valves; a tenor horn with rotary valves (instead of a trombone) and a tuba with rotary valves played by Ewald himself. Of all these instruments, the most interesting and different from their contemporary "colleagues" are the alto and tenor horn. There is no record of whether the composer envisioned a fixed brass band or, in different cases, used different musical instruments according to the place, the setting, the type of event and the sound required. Particularly interesting is the tenor horn, similar to the modern euphonium. We do not know Ewald's motives for choosing instruments in his brass quintets. It is quite possible that he simply took advantage of the tools and performers available around him in search of homogeneous sound and virtuoso possibilities.

Until the late 1950s, Ewald was considered to have written only one brass quintet. This impression is created because the only one officially published by the music publishing house of Belyayev in 1912 is the quintet op. 5 in E flat minor. The other 3 quintets were discovered only in 1964 by Andre Smith - a musicologist and former bass trombonist at the Metropolitan Opera, who received the valuable manuscripts from Ewald's son-in-law Eugene Gipius. In the following years, the scores were carefully studied to prove their authenticity. Their first performance was in the 1974/1975 season in a series of concerts at Carnegie Hall at the iconic American Brass Quintet, then with Louis Ranger (trumpet), Raymond Mace (trumpet), Edward Birdwell (waldhorn), Herberd Rankin (trombone) and Robert Biddle (tuba).

The obvious shift in the opuses is due to a misinterpretation of the writing of quintet no. 4, which for many years has been considered a rework of the Ewald String Quartet, published as op. 1. In fact, in his research, Andre Smith proves the opposite - the quintet was originally written for brass, but was quite difficult to perform at the time. Probably that is why Ewald made the transcription for string quartet, which is his first published work as a composer - this was done by Belyaev's music publishing house in  the same 1888.

The history of brass quintets is as fascinating and interesting as the life of Viktor Vladimirovich Ewald. And his wonderful music for brass instruments will continue to sound. We hope that this will happen in the performance of new and new musicians, glorifying the Bulgarian performing school around the world…

Translation in English: Tsvetelina V. Georgieva
The article is available in Bulgarian and in Dutch
Translation in Dutch: Ruben Vermeulen

Angel Kotev: Beauty in music as a professional credo